“Begin at the Beginning and go on till you come to the end; then stop,” said the King to the White Rabbit in Alice in Wonderland—and that’s what I’m doing with The Story of Route 36: America’s Heartland Highway.

I’m back from several weeks in the Midwest, starting this trip at the beginning—at Uhrichsville, Ohio, where Route 36 starts its east-west journey just 50 miles from Wheeling WV.

A main “takeaway” from this trip: Few people in Ohio, Indiana, or Illinois, are aware that US Highway 36 extends some 1400+ miles from Uhrichsville to Rocky Mountain National Park and is the historic mid-section of what was once known as the Pikes Peak Ocean to Ocean transcontinental highway. Perhaps my guidebook can help change that situation.

Beautiful Ohio. Traversing Ohio, although I encountered unseasonably cold and wet weather in April, I had no doubt that in the fullness of summer and the crisp air of autumn, no place on Earth could be more beautiful than rural Ohio. Route 36 mostly meanders from the foothills of the Appalachians through river valleys and picturesque towns between Uhrichsville and Delaware (above Columbus) and then flattens out a bit in central Ohio as it rolls on through rich farm land to Greenville and Indianapolis.

Our Native American Heritage (and National Shame). A highway like Route 36 exposes us to Native American history in a way no Interstate highway can. Just think of the town names along Route 36 in Ohio: Newcomerstown, Coshocton, Delaware, Piqua; then several of the states traversed by Route 36: Ohio, Illinois, Missouri, Kansas—all derived from Native American tribes and languages. At Gnadenhutten near Uhrichsville we learn of one of the most egregious massacres (in 1782) of innocent men, women, and children in the history of our country. At Greenville we learn of the Treaty of 1795 that opened Ohio to Euro-American settlement. At Piqua we can visit the Johnston Farm (www.johnstonfarmohio.com) where John Johnston served as Indian Agent to western Ohio and where dedicated staff have assembled an educational presentation focused on the intersection of Native American and Ohio histories. Near Mankato, Kansas, the Pawnee culture comes alive at the Pawnee Indian Museum (www.kshs.org).

The Serendipity of Slow Travel. When I unfolded the foil wrapper on a piece of chocolate recently, printed on the inside of the wrapper was the admonition, “Get Lost on Purpose.” That’s my approach to slow travel on a highway like Route 36. I have a plan but I’m after the surprise, the serendipity of discovery. I like to wander down a rural road or just drive the residential streets of a small town. To quote Forrest Gump, slow travel is “Like a box of chocolates. You never know what you’re going to get.” When you leave the beaten path you find all kinds of surprises. Here are a few of those surprise “chocolates” I found on this trip: 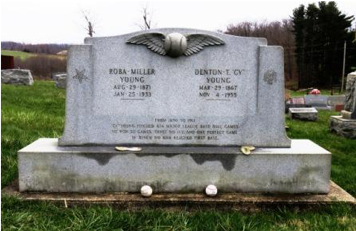 In search of Cy Young. Newcomerstown OH promotes itself as the “hometown” of baseball great Cy Young, but he was actually born in nearby Gilmore and lived in retirement at Peoli, a tiny hamlet ten miles from Newcomerstown. Not satisfied with what I found in Newcomerstown, I went looking for Cy Young’s gravesite in the village churchyard at Peoli. I might not have found it without the help of a Cy Young relative who was there to see the gravesite. The search took the better part of an hour on a winding, hilly Appalachian back road, but it was worth it. I got the photo I wanted. Note the baseballs placed by a fan on the base of the grave. 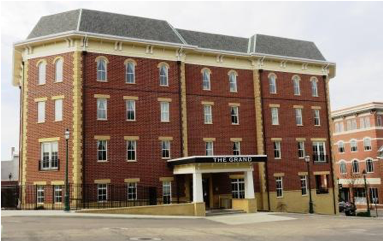 An anomaly in modern lodging. A most remarkable thing has happened in Mt Vernon OH: an appropriately-named Grand Hotel has been built—not out on the edge of town with the chain motels, but in the middle of town on the south side of the public square. The Grand is an elegant, reasonably-priced, 46-room beauty with attention to every detail. Financed by town benefactor, the Ariel Foundation, the hotel is now owned by Mount Vernon Nazarene University (www.mountvernongrand.com). When I was in town I attended a Chautauqua event at the hotel where an appreciative audience of locals (plus one) heard from Mary Todd Lincoln brought to life by actress Barbara Brugler. Mrs. Lincoln relayed the trials and tribulations of her life after the assassination of President Lincoln. The Grand is a grand shot in the arm for an All-American Hometown. 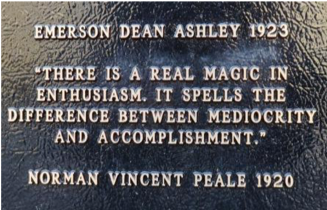 Words to live by. At Ohio Wesleyan University in Delaware I stumbled on to these memorable words from Norman Vincent Peale on a plaque sponsored by university alum: “There is real magic in enthusiasm. It spells the difference between mediocrity and accomplishment.” 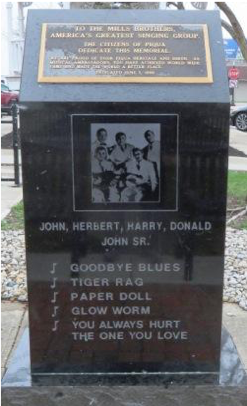 A total surprise. Despite my music background and love for the Mills Brothers, I had no idea the singers were born and raised in Piqua, Ohio. This marble marker on the town’s Fort Piqua Plaza celebrates the talented family. While I was there, a sold-out concert featuring John Mills (one of the sons) was held in the function room of Piqua’s magnificent public library, proceeds going to the above-mentioned Johnston Farm and Indian Agency.

My guidebook will not be cataloging the ever-changing restaurant and lodging scene—tracked most effectively on the internet. But I can’t resist mentioning some great watering holes I’ve found along the way. If you are ever within striking distance of any one of them, you’ll enjoy a satisfying stop. 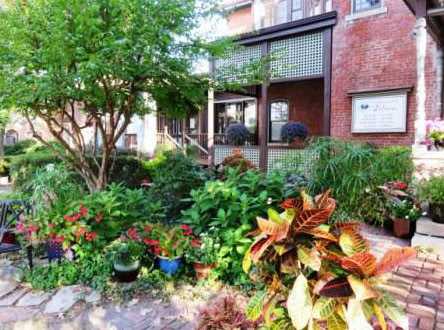 Incredibly Delicious – Springfield IL. The name says it all. This may well be the finest bakery/patisserie this side of Paris, France. Housed in a Victorian-Italianate mansion, it’s at 925 S. 7th St., a few blocks south of town center. 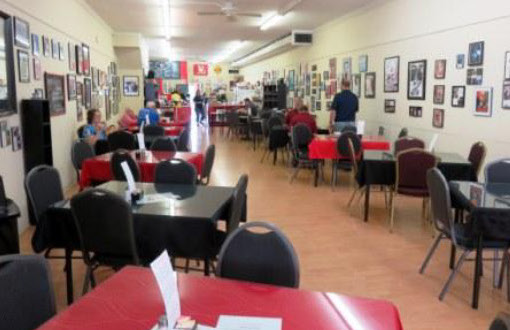 Boji Stone – Chillicothe MO. Books, music, coffee, good food, artwork—pretty much all the ingredients of a great life. On the main drag across from the county courthouse in the center of town.

A.J.’s – Macon MO. People come from miles around to A.J’s for good, honest food well prepared in a convivial space. It’s on US63 a few blocks south of US36. 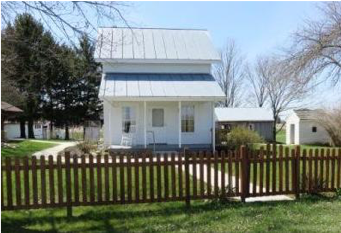 Who woulda thunk it? At tiny Mooreland, Indiana, police had stopped traffic to accommodate a tractor trailer with a wide load. I saw a sign—“Wilbur Wright’s birthplace, 4 mi south.” I pulled out of the queue, headed south, and was delighted to find the restored Wright home and an informative museum housing a full-scale replica of Orville and Wilbur’s famous plane. If you can’t get to Kitty Hawk, this is a good alternative—and far less busy.

In closing we say “so long and thanks” to Beth Carmichael of the St. Joseph Chamber and Visitors Bureau—gone from the US36 Alliance in Missouri but newly appointed to the directorship of the CVB in Trumble County, Ohio. Beth has been instrumental in promoting the “Genius Highway” (Route 36) in Missouri.

Until next time—happy travels on Route 36,