NUMBERED HIGHWAYS AND THE MAKING OF ROUTE 36

An extract from Background Chapter Two of Route 36: Ohio to Colorado—America’s Heartland Highway

BY THE EARLY 1920s, in addition to a few transcontinental routes like the Pikes Peak Ocean to Ocean Highway, hundreds of other “named trails” criss-crossed individual states and regions of the country. The result was a confusion of signage and unorganized routes leading toward sheer highway chaos. At the close of World War I, sentiment in the states and, ultimately, in Congress, grew for federal involvement in standardizing signage and applying a numbering system to the tangle of named highways. 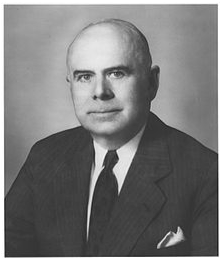 Thomas MacDonald, powerful head of the Bureau of Public Roads

As early as 1920, some states—notably the midwestern states of Wisconsin, Iowa, Illinois, and Indiana—had begun numbering their highways. Seeking to forestall further chaos in interstate travel, the American Association of State Highway Officials (AASHO) in late 1924 called for a halt to the naming of highways and urged the formation of a Joint Board on Interstate Highways combining membership from the Bureau of Public Roads (BPR) and AASHO. They wanted a rational numbering system. Their further intent was to permanently break up the named transcontinental trails (e.g., Lincoln Highway, National Old Trails Road, Pikes Peak).

Subsequently, the Secretary of Agriculture appointed a committee of twenty-one members from AASHO and three from the BPR. The Joint Board was charged with devising a “uniform scheme,” applicable nationwide, for the signage and numbering of highways with interstate importance. The committee was chaired by the BPR chief, Thomas MacDonald. MacDonald’s right-hand man, E.W. James, would be the influential secretary of the board—ultimately chairing both the signage and numbering subcommittees. 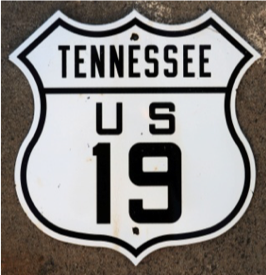 Finding consensus on a numbering scheme was an even more daunting task. Yet, in retrospect, the complicated process involving forty-eight states and, ultimately, some 96,000 miles of roadway, was handled with remarkable efficiency and decisive action. The reason: the Joint Board did not hold any public hearings. All issues were hammered out by select committees; debate involved a limited number of state governors, highway men, and promotional associations. The upshot: Between April 1925 and November 1926—a mere nineteen months—a basic framework for knitting together the nation’s primary highways was conceived and endorsed by AASHO, the Secretary of Agriculture, and Congress.

The numbering system proposed by E.W. James reportedly came to him in a flash of insight—both elegant and flexible in its simplicity. Major east-west routes would be assigned even numbers in multiples of 10, with the lowest numbers along the Canadian border and US90 following the Gulf Coast from Florida to California. This put US30 (the Lincoln Highway) and US40 (the National Old Trails Road) in the Midwest. Two-digit, even numbers between the zeroes would be used to designate interstate highways of secondary importance—thus, part of the Pikes Peak Ocean to Ocean, lying between US30 and US40, would become US36. Other parts of the PPOO would be renumbered or revert to state control (remember, a goal of the Joint Board was to break up the named transcontinental trails). With more north-south routes to accommodate, James proposed using odd numbers ending in “1” and “5” for interstate routes ranged from east to west (thus, we have US1 on the east coast and US101 on the west coast).

In the numbering of the interstate highways created by the Interstate Highway Act of 1956, this scheme was turned on its head—that is, even numbers ran from lowest on the south to highest on the north, while odd numbers were assigned from lowest (west) to highest (east). Otherwise, the Joint Board’s framework remains in place today for the “old” US-numbered highways.

The Making of Route 36

WITH INDIANAPOLIS AS THE first eastern terminus of US36, extension of the highway eastward awaited highway construction as it was carried out in the late 1920s and early 1930s in eastern Indiana and western Ohio. Ultimately, Route 36 faithfully followed the old Pikes Peak Ocean to Ocean Highway route through Ohio. On the west end, the Joint Board followed the PPOO to its intersection with US24 east of Colby. That changed in 1929, as noted below.

Following are the historic east-to-west end-points of US36. For this I am indebted to a website www.USends.weebly.com managed by Dale Sanderson of Denver, Colorado. 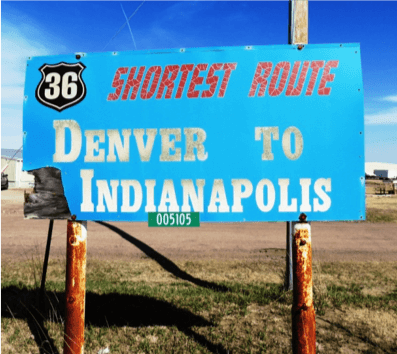 Summary:  Several developments stand out after the numeric designations of 1926. First came the important decision to drop the route toward Colorado Springs in favor of a direct line stretching 240 miles toward Denver through Byers (1929) and Strasburg (1933). The equally important 296-mile extension eastward from Indianapolis to Cadiz, Ohio, came between 1931 and 1933. Downtown Denver received terminus recognition in 1937 (overlapping with US40 and US287 along E Colfax Ave) where it remained for thirty-one years. In 1968, with completion of Interstate 70 on the north side of Denver, the E Colfax leg was dropped and US36 was combined with I-70, a short stretch of I-25, and extended by incorporating the “Denver-Boulder Turnpike” and the state highway from Boulder to Estes Park, the “Gateway to Rocky Mountain National Park,” where it has remained for more than fifty years. Minor changes in the end-points from Cadiz to Uhrichsville in Ohio and to Deer Ridge Junction in RMNP are noteworthy but of little consequence.

To take a photo journey down Route 36, see Photo Gallery.