The transcontinental Pikes Peak Ocean to Ocean Highway (PPOO) – an abridgement of a longer section in Background Chapter 2 of Route 36: Ohio to Colorado—America’s Heartland Highway 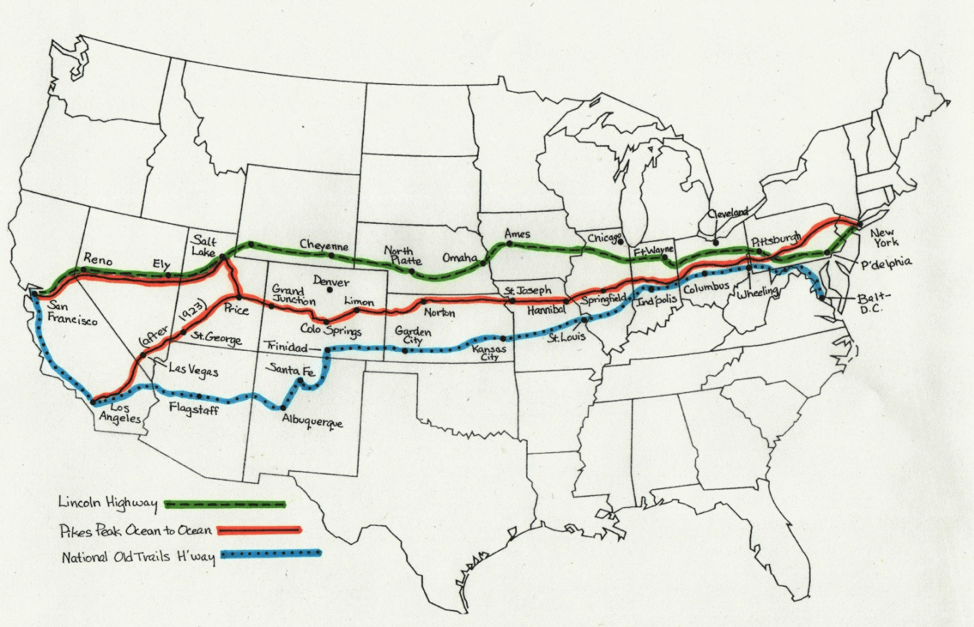 THE TRANSCONTINENTAL PIKES PEAK OCEAN TO OCEAN HIGHWAY (most often spelled “Pikes” rather than “Pike’s”) was the “parent” of US Highway 36. Its relationship to two other major transcontinental trails traversing the “heartland” is shown on the map above.

Between 1912 and 1914, as rough transcontinental roads were getting  organized as “named trails,” the Lincoln Highway (LH) chose a sensible path following the route of the transcontinental railroad (think I-80) through the upper tiers of several Midwestern states east of the Mississippi, then through Iowa, Nebraska, Wyoming, and on to California (the green line on the map). 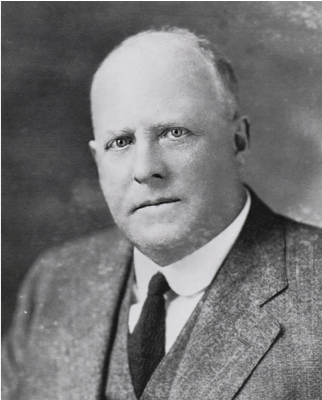 The National Old Trails Road (NOTR) followed the old National Road (think I-70) to St. Louis at the Mississippi River, then adopted the old Santa Fe Trail through Kansas, southern Colorado, and New Mexico and picked up desert trails to California (think Route 66 and I-40 and see the blue line on the map).

Having been by-passed by the LH and NOTR, boosters in Colorado Springs, Denver, and the northern counties of Kansas and Missouri wasted no time in starting a new transcontinental highway that might compete with the LH and the NOTR. Over several years, organizers of the PPOO carved a path between the NOTR and the LH to promote the attractions, towns, and cities by-passed by those highways. Boosters in Colorado wanted to bring tourists to the scenic Rocky Mountains, and boosters in the Midwest wanted a major transcontinental through the middle of Illinois and the northern counties of Missouri and Kansas.

Prime movers in the organizing of the PPOO were from Colorado, Kansas, and Missouri. The principals were A.W. Henderson of Colorado Springs; A.Q. Miller, editor of the Belleville (KS) Telescope; George McInich, mayor of St. Joseph, Missouri; and C.F. Adams, an energetic, entrepreneurial mayor, grocer and auto dealer in Chillicothe, Missouri. The organizing meeting of the PPOO was held March 18, 1914, at the Robidoux Hotel in St. Joseph, Missouri.

AS ORIGINALLY CONCEIVED, the PPOO stitched together a string of existing highway associations. The PPOO proposed sharing the same roadway with the Lincoln Highway between New York City and Philadelphia. From Cumberland, Maryland, to Indianapolis, the PPOO would piggyback on to the National Old Trails Road connecting Washington D.C. with the state capitals of Ohio and Indiana. 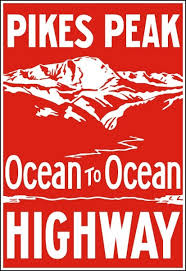 West of Indianapolis, the PPOO would leave the NOTR and stitch together a combination of existing highway associations. In Colorado, the PPOO followed a route to Colorado Springs (with a branch to Denver), then traversed the scenic Rockies to Grand Junction near the Utah border. In Utah, Nevada, and California, the PPOO linked up to the Overland Trail and the route chosen by the Lincoln Highway into San Francisco.

Such was the idea in 1914. By the early 1920s, the route of the PPOO had been almost entirely changed, leaving the NOTR behind and by-passing most major cities after leaving New York City. The directors also moved the highway’s western destination from San Francisco to Los Angeles. In other words, the PPOO changed its mission from connecting major cities to connecting minor cities and towns between New York and Los Angeles. Ostensibly, this was done in the interest of scenic, efficient travel but, in good American tradition, it really was done in pursuit of the almighty dollar by going where the competition did not go. There was simply no way to make any money by piggy-backing on to transcontinentals with more notoriety and better funding.

It was the propensity of the PPOO directors to change their mission and message that led historian Richard Weingroff of the Federal Highway Administration to famously dub the PPOO “the highway that couldn’t make up its mind.” In Route 36: Ohio to Colorado—America’s Heartland Highway, Allan Ferguson develops this story in a background chapter, “Named Trails and the Heartland Highways.”

BETWEEN UHRICHSVILLE, OHIO, and Norton, Kansas (about 1,100 miles), Route 36 closely reflects the middle third of the transcontinental PPOO. It is at Norton where the PPOO and Route 36 parted company (see Numbered Highways and the Making of Route 36 for more information).

In contrast to the National Old Trails Road (US40, et al.), the Lincoln Highway (US30), and Route 66 (de-commissioned in 1985), Route 36 has not been swallowed up (“subsumed”) by the US Interstate Highway System. The only stretches of highway where US36 is “doubled” by an interstate highway are:  • on I-70 around Indianapolis, • on I-72 between Decatur, Illinois, and Hannibal, Missouri and • on I-70 around Denver. In these cases, it remains easy enough to skirt the interstate highways in favor of driving “Old 36.” For 200 miles in Missouri, Route 36 is a four-lane, limited-access highway closely following Old 36. Otherwise—through Ohio, most of Indiana, eastern Illinois, all of Kansas, and eastern Colorado—Route 36 is a largely two-lane experience.

In short, the Pikes Peak Highway was and today’s Route 36 is the most direct, scenic, and historic route from the Midwest to the Rockies.  As travelers on US36 today, we can be thankful for the PPOO’s decision to forsake the big cities in favor of the small towns and cities of the heartland, especially in Ohio and Indiana. West of Springfield, Illinois, there never were cities of much size along this path other than St. Joseph, and that remains true today. It is precisely these villages, small towns, and cities—and the countryside between them—that beckon us eastward and westward on Route 36.

For a photo journey down Route 36, see the Photo Gallery. For more information about the numbering of US highways, see Numbered Highways and the Making of Route 36.